In order to strengthen the management system of medical and scientific use of controlled drugs, Taiwan government referred to the three major drug control treaties of United Nation to formulate the “Controlled Drugs Act” in 1999. There are three kinds of system to manage controlled drugs, including (1) Schedule Management, (2) Licensing Regulation Management and (3) Diversion Control Management, such as the reporting and auditing systems. In this article, the management system of controlled drugs will be discussed thoroughly. Under the “Controlled Drugs Act”, the controlled drugs are scheduled by the tendency of their habitual use, drug dependency, abuse, and social hazard. If violating the rule, the administrative sanction is applied. Cases of violations will also be given in this article.

Having regard to the public health and social problems resulting from the rising trend of the abuse of narcotic drugs and psychotropic substance, the UN formulates the “Convention against Illicit Traffic in Narcotic Drugs and Psychotropic substances” in 1988.

Since there is a large overlap between controlled drugs and illicit drugs, drugs can be considered either controlled or illicit based on proper or improper usage. In Taiwan, there are three strategies to prevent drug abuse: “supply reduction”, “demand reduction” and “harm reduction”. For supply reduction, TFDA classify and mange legal drugs in order to prevent abuse and eliminate fraudulent manufacturing and illicit smuggling. The goals of “demand reduction” are to prevent first-time drug use, reduce illegal drug abuse, prevent overprescribing and misprescribing of controlled drugs, and lastly to promote drug rehabilitation. The harm of drug abuse needs to be reduced by reducing criminal rate, transmission of contagious disease, and the impacts on family and the community.

3. Regulation of controlled drugs in Taiwan

Based on the “Controlled Drugs Act” in 1999, there are four important regulations for controlled drugs in Taiwan:

Regulations of Rewards for Reporting the Misuse of Controlled Drugs

The management system of controlled drugs in Taiwan has three parts, including (1) Schedule Management, (2) Licensing Regulation Management and (3) Diversion Control Management, such as the reporting and auditing systems. 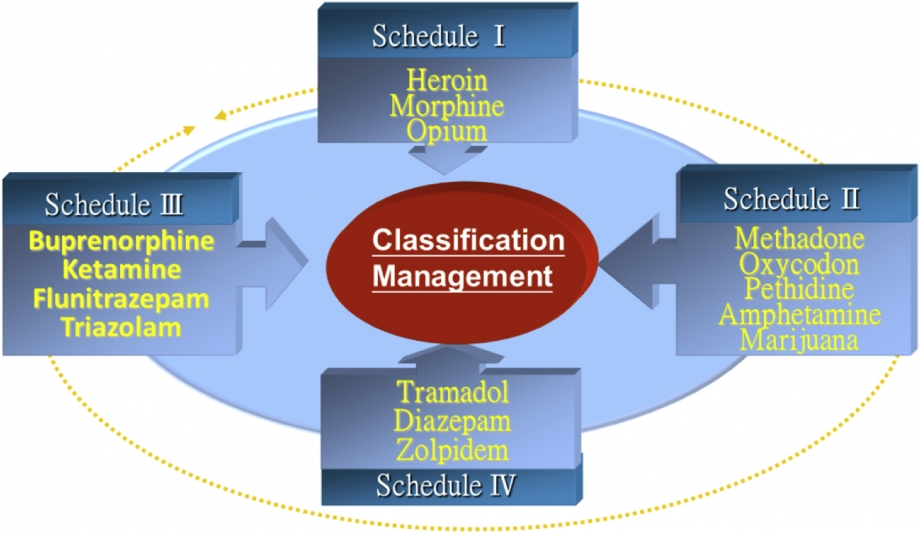 A total of 7 precursor chemicals currently fall under the raw materials of controlled drugs: ephedrine, ergometrine, ergotamine, lysergic acid, methylephedrine, phenylpropanolamine and pseudoephedrine. It has been observed in recent investigations that many drug labs tend to use common cold medicines with high concentrations of ephedrine in the making of amphetamine. In order to prevent legal medicine from becoming ingredients for drug production, the Ministry of Health and Welfare has implemented regulations over the concentration, logistics, and distribution of ephedrine-based medicine packages. The ministry has also strengthened its collaboration with investigative authorities to reduce illegal use of ephedrine-based medicine, from 19 cases in 2011 to 9 in 2012, and further down to 4 in 2013, as has been reported by the Investigation Bureau.

Table 1. Management of controlled drugs by the classification. 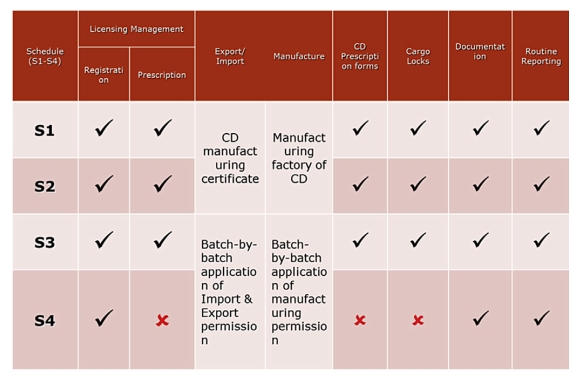 Numerous guidelines were announced by TFDA to manage controlled drugs for medical use. There are seven guidelines for addictive anesthetic, such as “Prescription handbook for cancer pain control”, “Guidelines for prescribing narcotics for chronic pancreatitis patients”. For sedative tranquilizers and hypnotic control drugs, “guidelines for Benzodiazepine use in sedation and hypnosis” was published by TFDA.

There are several licenses issued for different purposes:

Permits for Importing, Exporting, and Manufacturing Controlled Drugs: for people who want to import, export or manufacture controlled drugs;

Other licenses: such as Transportation license, License of Controlled Drugs used in Medical and Pharmaceutical Research.

Up until 2013, there were 14,511 controlled drug registration licenses issued.

According to the Controlled Drugs Act, businesses with registration for controlled drugs must also set up record books detailing input/output, disposition, reduction and remaining balance. The date and methods of input/output must also be stated and reported to local health authorities, as well as the TFDA. In order to save on administrative cost and efficiently keep records on logistics of controlled drugs, the Ministry of Health and Welfare implemented a “Controlled Drugs Management Information System” to help businesses conduct internet-based auditing. By 2013, a total of 95% businesses and Institutes have adopted internet-based auditing, making the process more convenient and making it easier to conduct inquiries. Through the “Controlled Drugs Management Information System”, health authorities may conduct real-time evaluation of logistics for controlled substances. Any unusual activities will be marked for on-site inspections in case of illegal conduct.

In order to prevent the abuse or misuse of controlled drugs, the TFDA drafts evaluation guidelines for management of controlled drugs for standard evaluation procedures. Through the “Controlled Drugs Management Information System”, local health authorities mark establishments with unusual activities, previous violations or incomplete audit reports. The TFDA will then assist evaluation officers from local health authorities to conduct further evaluation. Any violators or suspects will be reported to law enforcement authorities for investigation.3 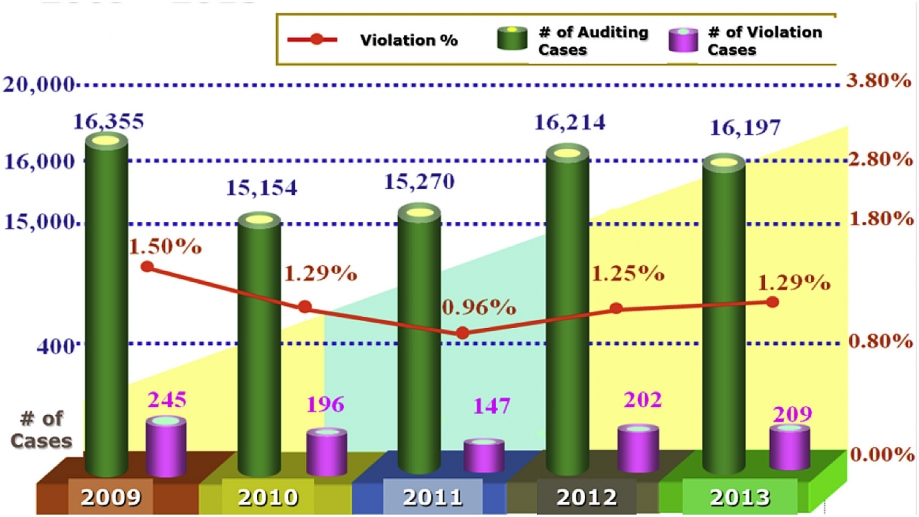 The top 5 controlled drug violations are:

Any disputes over controlled drug prescription will be examined by “Review and Approval Committee on Controlled Drugs for Medical Use”. The committee consists of representatives from medical, pharmaceutical associations, and consumer society. Reviewing the applications for purchase increment and evaluating the import of new Schedules I and II controlled drugs are also the committee's missions. Committee Meeting are held every three months.

There are several cases of violation of Controlled Drugs Act in Taiwan. A physician prescribed 2mg of Flunitrazepam (SUME tablets) to a large portion of his patients. In one occasion, he prescribed 500 tablets for a patient. During the second audit, a single dosage reached the amount of 80-100 tablets, which was an average of 3 to 8 tablets per day. Per the Controlled Drugs Act, a doctor's license will be suspended for 6 months to 2 years if he/she prescribes medication outside of the allowed amounts. During the first audit, the physician was fined 60,000 NT dollars, and received a written notice to change his methods in prescribing controlled drugs. During the second audit, the physician was fined 70,000 NT dollars, and his prescription license was suspended for one year.

Selling illegal drugs and treating patients are sometimes in the gray area. There was a medical clinic whose physician overprescribed 250,000 sleeping tablets to patients in 7 years. The physician was arrested and jailed for 8 years and another 5 suspects were arrested, too.

The authors declare that this article was conducted in the absence of any commercial or financial relationships that could be construed as a potential conflict of interest.