Tapia's syndrome and pressure alopecia (PA) are two rare but distressing complications associated with orotracheal intubation and positioning of the head during surgery. To our knowledge, simultaneous occurrence of both complications after surgery has not been previously reported. To avoid these disturbing complications, the mechanisms of the injury and the preventive measures should be recognized by anesthesiologists and surgeons. We herein present the case of Tapia's syndrome together with PA following open septorhinoplasty under uncomplicated endotracheal general anesthesia in a 27-year-old man. We review other case reports and discuss the potential underlying mechanisms of injury.

Tapia's syndrome and pressure alopecia (PA) are two rare complications related to anesthesia that may cause considerable psychological distress to the patient for a long time, especially when they occur after cosmetic surgeries. Therefore, both anesthesiologists and surgeons should be aware of the possible mechanisms of the injury and the importance of the preventive measures.

Tapia's syndrome, first described in 1904 by the Spanish otorhinolaryngologist Antonio Garcia Tapia, is characterized by combined unilateral paralysis of the hypoglossal nerve and the recurrent laryngeal branch of the vagus nerve secondary to an extracranial injury.1, 2 Tapia's syndrome is a rare consequence of orotracheal general anesthesia, with half of the cases reportedly occurring after rhinoplasty or septorhinoplasty.3, 4 PA, first described by Abel and Lewis in 1960, is localized pressure-induced ischemia to the scalp mostly due to prolonged head immobilization during lengthy periods of general anesthesia, and is most commonly reported after cardiac surgery.5, 6 To our knowledge, PA after septorhinoplasty as well as simultaneous occurrence of both Tapia's syndrome and pressure alopecia has not been previously described. We herein present the case of Tapia's syndrome together with PA following open septorhinoplasty under uncomplicated endotracheal general anesthesia in a 27-year-old man. Other case reports are also reviewed, and the potential underlying mechanisms of injury are discussed.

A 27-year-old man (weight: 90 kg and height: 186 cm), American Society of Anesthesiologists physical status Class I, was admitted for septorhinoplasty due to nasal obstruction with external deformity. Administration of general anesthesia and orotracheal intubation were performed without difficulty. A Macintosh blade Number 4 laryngoscope was used and an 8-mm armored cuffed tracheal tube was gently placed in the trachea on the first attempt, and was fixed to the left corner of the mouth. The cuff was inflated with 3 mL of air where no audible leak was heard, and the lungs were easily ventilated with intermittent positive pressure ventilation. A small moistened throat pack was then gently placed in the lower pharynx using laryngoscope and Magill forceps. The open septorhinoplasty was performed by otolaryngology residents in the supine position with the head and trunk slightly elevated. Topical phenylephrine 0.25% was applied for nasal mucosal decongestion and 10 mL solution of 1% lidocaine/1:100,000 epinephrine was injected in the septum, sites of incision, and osteotomy line. Systolic arterial pressure was kept between 80 mmHg and 90 mmHg for controlled hypotensive anesthesia. The patient was maintained hemodynamically stable and well oxygenated throughout the uneventful 6 hours of surgery. At the end of the surgery, the patient was extubated once fully awake.

The 1st postoperative day was complicated by the patient's complains of pain and tenderness on the occipital area, difficulty in swallowing and speaking, hoarseness, and aspiration. A physical examination revealed localized swelling and tenderness in the occiput, and marked deviation of the tongue to the left side during protrusion (Fig. 1). Paramedian immobile true left vocal cord without edema or bruising was detected during laryngoscopy. The pharynx and soft palate were normal. A complete neurological evaluation showed normal results. A 2 cm × 2 cm skin redness was detected on the buttock area. Brain magnetic resonance imaging (MRI) showed no abnormality. The patient empirically received 50 mg prednisolone, and vitamins B1 and B12 daily for 7 days. The patient refused our recommendation for speech and swallowing therapy. One week after the operation, he complained of progressive hair loss over the previously tender area, and an area of alopecia (3.5 cm × 1.5 cm) was detected in the occiput region (Fig. 2). 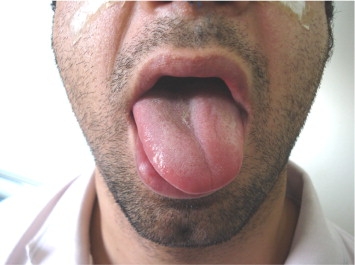 Download full-size image
Fig. 1. After surgery the tongue was deviated to the left side during protrusion. 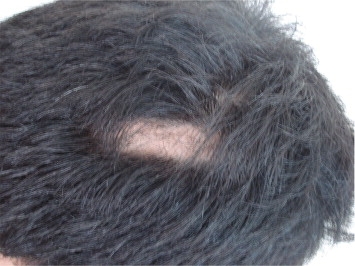 There was significant improvement in swallowing and aspiration problems within 3 months after the surgery with no detectable improvement in the tongue or vocal cord function. Six months after the surgery, functions of the tongue and vocal cord were also completely resolved and normal hair regrowth was noted in the affected area, and the patient was happy with the surgical outcome.

Based on clinical signs, normal MRI findings, and progressive recovery of lingual and laryngeal functions along with hair regrowth within 6 months after the surgery, our patient was diagnosed with concurrent Tapia's syndrome and PA.

Tapia's syndrome is concomitant ipsilateral paralysis of the vocal cord and muscles of the tongue that causes hoarseness, difficulty in swallowing, uncontrolled tongue movements, disturbed speech, and ipsilateral deviation of the tongue to the denervated side on protrusion and to the contralateral side on rest.3, 4 Most of the cases were unilateral; however, bilateral involvement of the nerves has also been reported.2, 4 The progressive recovery of lingual and laryngeal function by our patient and in the majority of reported cases support a neuropraxic type of nerve damage.7, 8

Injury to the hypoglossal and the recurrent laryngeal nerves by endotracheal intubation or positioning of the head during surgery is the main mechanism of Tapia's syndrome.4, 9 Anatomically, the vagus and hypoglossal nerves lie near each other at the base of the tongue and in the pyriform fossa and run on the lateral prominence of the anterior surface of the transverse process of the first cervical vertebra between the greater horn of the hyoid bone and the ligamentum stylohyoideum. The crossing site of the nerves may be compressed by the endotracheal tube against these rigid anatomical tissues, leading to simultaneous nerve injury. Moreover, hyperextension or excessive anterior–posterior and lateral flexion of the patient head during surgery may also stretch or press these nerves between the tube and these hard tissues. The frequently involved operations were septoplasty and septorhinoplasty, maybe because of the proximity of the surgical sites to the airway, which can easily displace the endotracheal tube.3, 4, 10 However, Tapia's syndrome following an orthognathic surgery,3 a shoulder surgery,11 a surgical repair of a fractured mandible,12 a cervical laminectomy,13 thoracotomy,14 and cardiac surgery1, 15 was also described. In these cases, the most likely causes were a direct compression of the recurrent laryngeal and hypoglossal nerves by laryngoscope or orotracheal tube, excessive pressure to the nerves by inflation of the cuff in the larynx, malposition or displacement of the tracheal tube, extubation with inflated cuff, or a prolonged stretch of these nerves following an excessive hyperextension or flexion of the head during surgery.

Postoperative PA has been most commonly reported following cardiac surgery the most commonly reported finding following cardiac surgery. Cases of PA have also been reported after prolonged breast, abdominal, orthognathic, plastic, and ophthalmic surgery under general anesthesia.5, 6, 18, 19 Interestingly, we found no reported cases of PA after rhinoplasty or septorhinoplasty. The possible mechanism of PA is localized pressure-induced ischemia to the scalp, usually in the occiput region, due to prolonged constant pressure on the scalp as a result of prolonged head immobilization during long periods of general anesthesia. The constant pressure on the scalp may cause localized ischemic injuries to the blood vessels and hair follicles.6, 20 Furthermore, intraoperative hypotension, hypoxemia, massive blood loss, the use of vasoconstrictors, Trendelenburg position, and cardiopulmonary bypass may exacerbate ischemic changes on the scalp.5, 6 PA usually manifests as swelling, erythema, tenderness, or ulceration of the scalp within the first few postoperative days, followed by a distinct area of alopecia within a few weeks after surgery.5

In our case, we believe that the most probable predisposing factor for the nerve palsies and PA was prolonged (6 hours) malposition of the patient's head fixed in one position, and therefore prolonged pressure on the scalp during the lengthy surgical procedure. With regard to postoperative pressure-related hair loss in the occiput region and redness on the buttock, we attribute the clinical course to the prolonged immobilization of the body of the patient on the operating table, along with a stretching injury to the recurrent laryngeal and hypoglossal nerves due to a prolonged inadvertent hyperextension of the head probably for ease of nasal exposure during surgery. In the present case, even though orotracheal intubation was not traumatic or complicated, there also might be a possibility of a long-lasting undetected displacement of the tube under the surgical drapes that resulted in compression of both nerves between the endotracheal tube and throat pack. Moreover, the development of both complications may be aggravated by the use of prolonged hypotensive anesthesia, intraoperative use of topical vasoconstrictors, or forces transmitted to the occipital area during osteotomies. Inappropriate cuff pressure is also another important factor in the occurrence of intubation-related neuropathy. However, in our patient, because the cuff was not overinflated and nitrous oxide was not used, despite using an armored tube with low-volume and high-pressure cuff, we did not check the intracuff pressure during anesthesia.

Both Tapia's syndrome and PA almost always have a spontaneous and complete recovery within a few months.2, 6 However, rare cases of permanent hair loss have also been reported.18 There is no established treatment for these complications. However, in patients with Tapia's syndrome, supportive treatment with a short course of systemic steroids and vitamin B complexes has been used to reduce the duration of cranial nerve paralysis.4, 16 To avoid the stressful but preventable problems, the importance of preventive measures should be recognized by anesthesiologists and surgeons. The incidence can be decreased by proper positioning of the head during surgery, early detection and correction of the head malposition, carefully performing the routine maneuvers of airway management, appropriate fixation of orotracheal tube to prevent inadvertent displacement, proper placement and amount of throat packing in the oropharynx, and a shortened operating and intubating time. Regular intraoperative head repositioning is also recommended to avoid persistent occipital pressure and alopecia.4, 5

In our case, because of early diagnosis, close follow up, constant reassurance and sympathy, and the patient's satisfaction with surgical results, symptoms were well tolerated and we did not encounter legal issues.

In conclusion, in the presented case, prolonged malposition of the patient's head, in combination with endotracheal tube displacement may have contributed to the occurrence of Tapia's syndrome and PA. Once septorhinoplasty is performed under endotracheal general anesthesia, both anesthesiologists and surgeons should be aware of these complications.