Should abnormal coagulation data found in thromboelastography be corrected during liver transplantation? Experience of two cases

Coagulopathy is common in patients with end-stage liver disease requiring liver transplantation (LT). Thromboelastography (TEG) test results are used for analyzing coagulation data and making a decision about the transfusion requirements. However, whether it is necessary to correct the abnormal coagulation profile during LT is a matter of considerable debate. Herein, we report our experience with two patients who had LT without blood product transfusion despite TEG results showing abnormal coagulation data. The TEG was performed four times during LT. Although blood product transfusion was necessary according to the TEG guidelines, it was avoided. At the end of operation, the hemoglobin level was 8.5 g/dL and 9.5 g/dL for Patient 1 and Patient 2, respectively. The patients tolerated LT well and their subsequent recovery was uneventful. We suggest that TEG should be used cautiously to make a decision about blood transfusion, as it can be totally avoided in selected cases involving living donor LT.

Coagulopathy is common in patients with end-stage liver disease requiring liver transplantation (LT). Whether the coagulation profile during LT should be monitored with thromboelastography (TEG) and the abnormal data, if found, be treated subsequently are issues of considerable debate.1, 2 Herein, we present two cases involving living donor LT (LDLT) with abnormal coagulation profile reported by TEG. Although abnormal data should be corrected according to the TEG guidelines, it was avoided. The operation was completed without using any blood products.

We retrospectively reviewed the anesthesia charts of the two patients (one child and one adult). General anesthesia and intraoperative monitoring, except TEG, were performed as previously reported3; in addition, the fluids and blood replacement policies were followed as previously reported.4 TEG (Haemoscope Corporation, Niles, IL, USA) was performed for each patient at the following four time points: T1, at baseline prior to incision; T2, 4 hours after incision; T3, 10 minutes after the anhepatic phase; T4, 15 minutes after reperfusion. The anesthesiologist in charge determined the replacement of fluids, and was blinded to the TEG data. The TEG data were later analyzed after the LDLT. The results of the fluids and blood transfusion were compared with the TEG treatment guideline as reported earlier.5

Patient 1 was a 10-year-old child with liver cirrhosis due to extrahepatic portal vein occlusion, and Patient 2 was a 47-year-old adult with end-stage liver disease due to hepatitis B and hepatocellular carcinoma. Preoperative laboratory values of Patient 1 and Patient 2 were as follows: hemoglobin, 9.5 g/dL and 13.2 g/dL; platelet count 35 × 103/μL and 86 × 103/μL; international normalized ratio, 1.21 and 1.19; and activated partial thromboplastin time, 30.4 seconds and 36.7 seconds, respectively (Table 1). The data on timing and other TEG values are shown in Table 2. Although TEG guidelines recommend transfusion of blood products when abnormal profiles are found,5 it was avoided; the total blood loss was 420 mL and 950 mL with an Hb level of 8.5 g/dL and 9.5 g/dL at the end of the operation for Patients 1 and 2, respectively.

Table 1. Characteristics of the two patients. 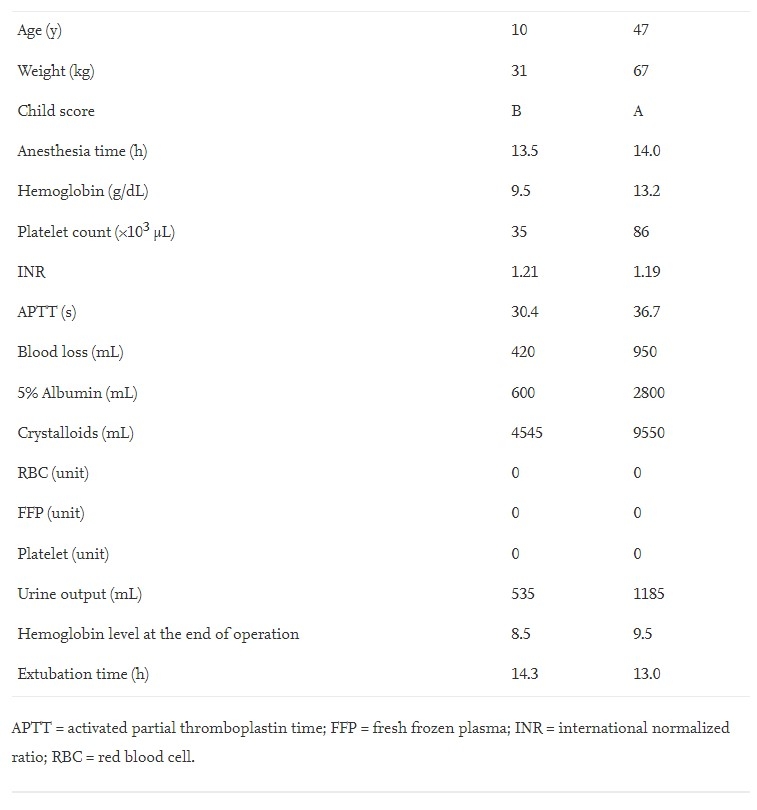 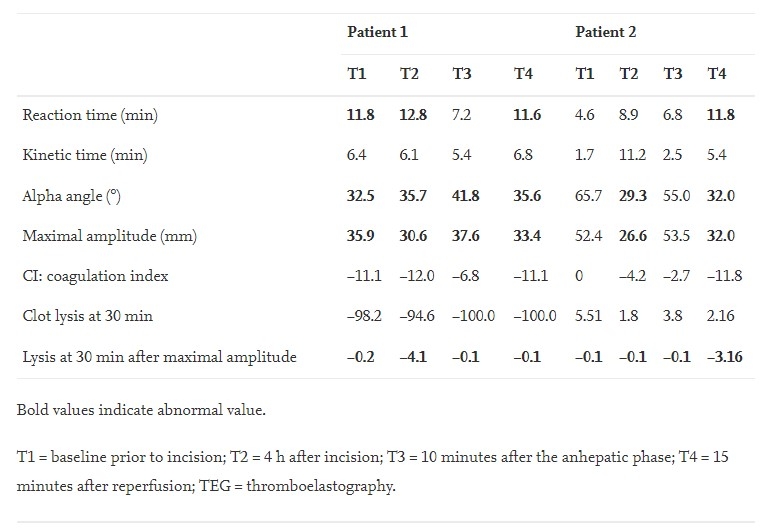 In the LT setting, blood loss and replacement of blood products may vary widely ranging from minimal to massive levels.6, 7, 8 Because preoperative and intraoperative coagulation profiles are not related and are only weak predictors of intraoperative blood loss,2, 9 whether coagulation profiles should be monitored and treated accordingly is an issue of considerable debate and remains controversial.2, 10 TEG is a reliable and rapid monitoring system in LT. In a previous study, a 33% reduction of blood and fluids infusion volume was achieved using TEG.11 However, Reyle-Hahn and Rossaint2 found that intraoperative determination of coagulation profiles is not important in directing the blood products used in LT. Massicotte et al12 reported that 79% of their patients did not receive blood transfusion during LT without monitoring of the coagulation profiles, and the same authors found that fresh frozen plasma (FFP) did not reduce the use of blood products, and the survival rate was worse in patients who had received FFP.13 We have also published our method of blood replacement in pediatric patients undergoing LT without monitoring of the coagulation profiles, wherein 42% patients did not require intraoperative blood transfusion.4 A similar policy was applied in our adult LT patient. The TEG monitoring was performed by personnel of the TEG Company as a demonstration of the TEG device, and the anesthesiologist in charge was blinded to the TEG results. Therefore, blood replacement and management of fluids were performed4 similar to our previous report and were not influenced by TEG results and treatment guidelines.5 Table 2 shows that intraoperative TEG of the two patients, values in bold letters, indicated abnormal data requiring treatment as suggested previously.5 According to the treatment protocol, 6–8 pooled units of platelets should be given when the maximum amplitude was less than 55 mm, 5 units of cryoprecipitate when the alpha angle was less than 45°, and FFP should be titrated to provide a reaction time of less than 10 minutes.5 No uncontrollable bleeding was noticed perioperatively (Table 1).

Bleeding in LT is a multifactor variable, and is not simply related to coagulopathy; other factors that contribute to bleeding in LT are surgical techniques and anesthesia management,14 previous abdominal surgery,9 central venous pressure,12 presence of collaterals with portal hypertension.2 Furthermore, the coagulation concepts of liver cirrhosis have changed recently, and it is found that abnormal coagulation data do not adequately reflect the clinical hemostatic status of patients with cirrhosis, because of the simultaneous changes of prohemostatic and antihemostatic pathways.15 Therefore, careful clinical observation of the operation field concerning the bleeding is important, more than prophylactic correction of the coagulopathy, as overhydration can cause more bleeding.2

In conclusion, correction of intraoperative hemodynamic changes using colloids and crystalloids should be considered as the priority rather than correction of coagulation abnormality. In addition, TEG should be used cautiously to make the decision of blood transfusion as it can be totally avoided in selected cases involving LDLT.