We retrospectively analyzed the records of 404 patients (aged ≥ 80 years and underwent a noncardiac surgery) collected from the quality assurance database in our department. We reviewed the patients' preoperative and intraoperative variables as well as postoperative complications and outcomes. Odds ratios of risk factors were then calculated by univariate and multivariate analyses. In addition, hazard ratios of incidence of discharge and mortality rates were analyzed.

Overall, 26.4% of patients developed one or more postoperative

Patients over the age of 80 years, of male sex, under general anesthesia, and receiving colloid infusion were at a higher risk of developing respiratory complications. Postoperative respiratory complications occurred in most of the geriatric surgical patients. Efforts to improve the surgical outcomes must include measures to minimize in-hospital complications. Detailed evaluation and better communicating the aforementioned risk factors to these patients are suggested for improving anesthesia quality and surgical outcomes.

With better medical quality and living conditions, the elderly population around the world is growing each year. More and more elderly patients are encouraged to receive operations that have previously been considered too risky.1, 2 However, geriatric patients often pose a significant challenge not only in emergency surgery but also in elective surgery.3 Because of the reduction in physiological reserve, these patients may not tolerate the surgery and may also develop more complications than younger patients.3, 4, 5, 6, 7

To survey the operative mortality in elder adults, Finlayson and Birkmeyer6conducted a retrospective study that included 1.2 million patients aged 65–99 years who received major elective surgery. They found that mortality risk increased generally with age. Operative mortality for patients over the age of 80 years was more than two times than that for patients aged between 65 years and 69 years. A study in Japan reported that risk factors for decreased survival rate in patients aged 80 years and older who underwent surgery with general anesthesia were the male sex, dependency in daily living, and abdominal surgery.8

Thus, it can be seen that some elderly patients benefit from the surgery, whereas others might suffer from postoperative complications that may lead to a worsening situation. Therefore, studies on operative risk evaluation for geriatric patients may help physicians to decide whether to perform surgery. However, to date, such studies were not conducted in Taiwan. Therefore, the aim of our study was to assess the postoperative outcomes of Taiwanese elderly patients aged ≥ 80 years who underwent elective or emergent, noncardiac surgeries requiring anesthesia as well as to analyze the associated risk factors and types of complications these patients develop following surgery.

After obtaining approval from the Review Board of Chang Gung Memorial Hospital, Taoyuan, Taiwan, we retrospectively analyzed the records of all patients aged ≥ 80 years and underwent elective or emergent, noncardiac surgeries requiring anesthesia from January 1, 2008 to June 31, 2008 in our anesthesia quality assurance (QA) database. The QA database was composed of a number of standardized forms (database cards). Once a patient has received anesthesia for surgery, an anesthesiologist fills out a database card and data are registered in the database using a computer in the operating room. An anesthetic nurse updates the card at the time of care. The database card contained the following data: patients' demographics, comorbidities, anesthetic technique used, perioperative anesthetic management details, and minor or major perioperative complications. Perioperative complications such as changes in blood pressure or body temperature will have representing codes that are listed in a booklet that is kept near the anesthesia machine. Anesthetic nurses will inform the anesthesiologists about these complications and will also add the representing codes in the database card. Besides, every change following anesthetic administration such as change in blood pressure, body temperature, saturation, end-tidal carbon dioxide level is automatically fed into the computer, forming an “electronic anesthesia record” during every anesthetic delivery. On the next day, a trained continuous-quality-improvement coordinator checks the written anesthesia records, database cards, and electronic anesthesia record to ensure that every intraoperative event was recorded in coordination in our database. The data are verified by the anesthesiologists, anesthetic nurses, and a trained continuous-quality-improvement coordinator either in the computer anesthesia records or in the written anesthesia records. Thus, these data in the database system are reliable. In addition, any incident that occurred in the postanesthetic recovery unit was also recorded on these database cards.

The surgeons reported postoperative conditions that occurred in the intensive care units (ICUs) or wards in an electronic chart every day. We obtained the data on postoperative conditions, including postoperative complications of 404 patients, by reviewing the patient's complete electronic chart, including the admission note. If patients had any of the aforementioned diagnoses preoperatively, they will be noted in the admission note by surgeons and these will not be counted as postoperative complications in the data analysis. We classified these complications into the following six types: neurological complications, cardiovascular complications, respiratory complications, renal function disorders, shock, and infection. Death of the patient was also recorded in the chart. Neurological complications were defined as the new occurrence of transient ischemic attack or stroke, intracranial hemorrhage, and seizure. Cardiovascular complications were clinically diagnosed myocardial infarction, documented ventricular tachycardia or fibrillation, and heart failure. Respiratory complications included respiratory failure requiring intubation > 48 hours, clinically diagnosed pulmonary edema, lobar, or aspiration pneumonia confirmed by chest radiography. Renal function disorders were acute renal failure and acute-on-chronic renal failure requiring dialysis. Postoperative infection required documentation of a positive culture. Postoperative death was defined as death during hospitalization or discharge due to critical condition in the ICU, ordinary wards, or even on the operating table. Other variables such as length of hospitalization and hospital mortality were also recorded and analyzed.

All data were entered into a Microsoft Excel (Microsoft Corporation, Redmond, WA, USA) spreadsheet and statistically analyzed using SPSS version 17.0 (SPSS Inc., Troy, NY, USA). Preoperative, intraoperative, and postoperative variables were assessed using descriptive statistics for mean and standard deviation of continuous variables and frequency tables for categorical variables. Variables that had significant association with postoperative adverse outcomes on univariate analysis were entered into a stepwise multivariate logistic regression model. Using this statistical model, each variable was examined for association with postoperative adverse outcomes while controlling for all other confounding variables. Logistic regression modeling was conducted for variables with p < 0.05, which was considered statistically significant. The odds ratios (ORs) and 95% confidence intervals of the variables were then summarized. In addition, because outcome is either discharge from the hospital or patient's death in the end, competing risks analysis was used to analyze how these perioperative conditions affected the cumulative incidence of discharge rate or mortality rate by hazard ratio. The R software (Foundation for Statistical Computing, Vienna, Austria) was used to analyze these cumulative incidence rates. The OR indicates only the overall odds for each variable, whereas the hazard ratio indicates the hazard of each variable in everyday hospitalization. 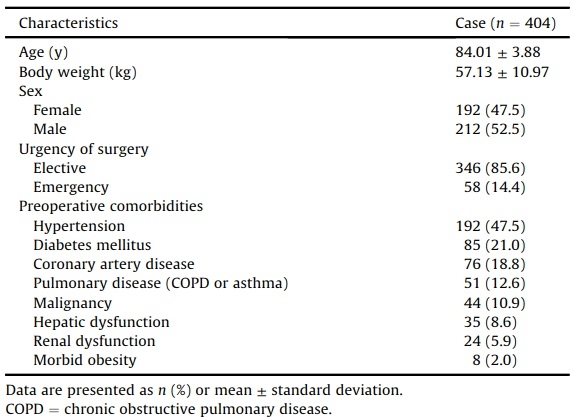 Table 2 lists the perioperative variables and postoperative morbidities. General anesthesia (66.3%) was the most common anesthetic method for these patients. Other anesthetic methods were regional anesthesia (28%) and IVG anesthesia (6%). The mean ± standard deviation of anesthetic time was 167.3 ± 17.2 minutes and most of them (87.1%) were < 4 hours. Orthopedic (31.4%), general (16%), and urological (15.3%) surgeries were the first three most common operations performed on patients aged ≥ 80 years. These three types of surgery contributed to the majority (> 50%) of the total numbers of geriatric surgeries performed. 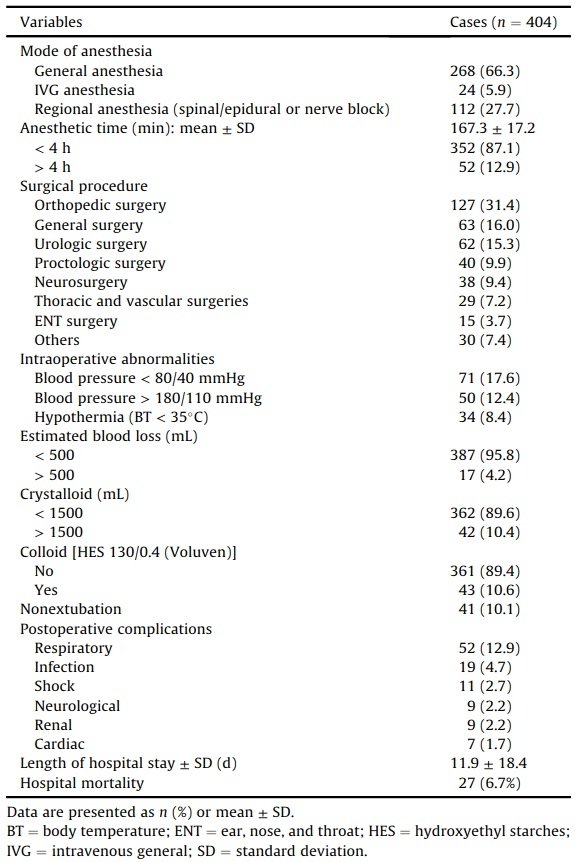 With growing medical advances, there is a gradual increase in the elderly population across the world, and maintaining the health of these patients is becoming a bigger problem. Taiwan is no exception in this regard as the average age of an individual in the country is 80 years or even older. The aging population results in an increasing number of operations. Therefore, we analyzed the morbidity, mortality, and their risk factors after noncardiac surgery in patients aged ≥ 80 years. The average age of study patients was 84 years. The mortality rate in our hospital was 6.7%. A review of the American College of Surgeons National Surgical Quality Improvement Program data demonstrated that patients over the age of 80 years had a mortality rate of 7%.9 Other previous studies on postoperative outcomes of geriatric patients revealed mortality rates of 5% and 10%.5, 10 Thus, it can be seen that our postoperative mortality rate in elderly patients is very close to the rest of the world. Anesthesiologists around the world are experiencing the same problem with elderly patients.

In our study, the most frequently seen preoperative abnormality was hypertension, which was present in almost half of the geriatric patients studied. Our result is in general agreement with previous studies that hypertension was the most prevalent preoperative abnormality.5 Concerning the type of surgeries performed, the most frequently performed surgery for geriatric patients was orthopedic surgery. Rates of orthopedic surgery, such as cervical spine fusions, for the elderly patients more than doubled in the United States from 1992 to 2005. Other surgeries such as total hip arthroplasties also increased significantly across case numbers.11, 12, 13 The second and third most frequently performed surgeries in our hospital were general and urological surgeries. A study revealed that the overall numbers of urological procedures performed in elderly patients had increased over the past 10 years.14 Our result is similar to these previous studies. From these results, we can see that most elderly people face similar problems when undergoing surgery. Therefore, it is common for anesthesiologists to encounter these problems in their daily practice.

A previous study indicated that clinical predictors of adverse pulmonary outcomes were the site of surgery, duration and type of anesthesia, COPD, asthma, preoperative hypersecretion of mucus, and chest deformation. The studies showed that obesity and older age were not considered risk factors, but chronic smoking within 1 month increased risk factors by approximately six-fold.15 In this study, we found that morbid obesity was not a risk factor for respiratory complications. However, we had limited data on the smoking history of our patients because this was a retrospective study. The surgical site may play a significant role in determining the development of postoperative respiratory complications. Some studies have shown that upper abdominal surgery performed close to the diaphragm seemed to have a higher postoperative respiratory complication rate than lower abdominal surgery.16In our study, due to a high number of samples, we did not consider this variable of surgical specialties in the study analysis. More samples must be collected and further study should be done in this regard. No matter what the risk factors of postoperative complications are, some preoperative preparations and evaluations should be considered. From the opinions of two previous studies, they suggested that patients with a high risk of pulmonary complications should quit smoking at least 8 weeks prior to surgery, undergo thorough preoperative pulmonary assessment for upper abdominal surgery, receive perioperative chest physical therapy, and have proper control of pulmonary infection before surgery.15, 17

For geriatric patients, some studies report that mortality was not increased in patients undergoing emergency procedures,8 whereas some report an increase.20, 21 In a previous study, an increased proportion of elderly patients underwent emergency surgery, which is known to increase the risk of postoperative mortality.4 Therefore, more studies must be carried out to confirm whether emergent operation is a risk factor or not.

This study has some limitations. Poor nutritional profile is a well-known risk factor for infection and wound dehiscence, which could contribute to greater perioperative mortality. In our study, because there was no documented information about malnutrition (e.g., albumin level), risks associated with poor nutritional profile could not be evaluated. In addition, our study was a retrospective single-center study in Taiwan. Further multicenter prospective study of the predictive risk model to assess the outcomes is thus required.