Cesarean under general or epidural anesthesia: Does it differ in terms of regional cerebral oxygenation?

It is aimed to evaluate whether there is a difference in regional cerebral saturation of newborns measured by near infrared spectroscopy born either by general anesthesia or combined spinal epidural anesthesia during elective cesarean deliveries.

After approval from the ethics committee of our hospital, and informed consents of the parturients were taken, 68 patients were included in the study. The regional cerebral oxygen saturations (RcSO2) of newborns were measured by near infrared spectroscopy (NIRS) measurements at 1st, 5th min after birth. In group I (n=32), general anesthesia was performed for the cesarean operation and in group II (n=36), combined spinal epidural anesthesia (CSEA) was the anesthetic management. The age of the mother, gestation, the problems related to the pregnancy, heart rate, blood pressure, oxygen saturation (SpO2) of the mother had been recorded. The measurements of the newborn were; SpO2 of right hand, RcSO2 mea

Combined spinal epidural anesthesia, besides other known advantages, had been shown to be superior to general anesthesia as a means of regional cerebral oxygenation of the newborns.

Noninvasive monitoring of rSO2 has been introduced in clinical settings for estimation of cerebral perfusion and cerebral blood flow (CBF).4 Near infrared spectroscopy (NIRS) can be used as a noninvasive monitoring technique for cerebral oxygenation and hemodynamics. NIRS is based on the transparency of the tissue to infrared light (spectrum 700–1000 nm) and its subsequent absorption by oxygenated hemoglobin (O2Hb) and deoxygenated hemoglobin (HHb) in the cerebral blood vessels, which are within the infrared beam. Absorption changes in near infrared light can then be converted into concentration changes of O2Hb and HHb.5

The aim of our study is to compare the rSO2 of neonates born by CS performed under epidural anesthesia and GA.

An appropriate standard of ethics was applied in carrying out our investigation. We followed the Ethical Principles for Medical Research Involving Human Subjects outlined in the Declaration of Helsinki. The research protocol was approved by our institutional ethics committee and written consent was obtained from all participants. Sixty-eight parturients, classified as American Society of Anesthesiologists (ASA) I/II, scheduled for elective CS, were included in the study. The indications for CS were decided by the obstetrician and emergency operations were not included in the study. Thirty-two CS patients were allocated to surgery under general anesthesia (GA; Group I, n = 32) and 36 patients agreed to be operated under combined spinal epidural anesthesia (CSEA; Group II, n = 36). The indications for either GA or CSEA were decided by the anesthesiologist and the obstetricians according to clinical guidelines and patient approval of the method. GA was induced with propofol 2.5–3 mg/kg, muscle relaxation with rocuronium bromide 0.6 mg/kg, and maintained by sevoflurane 1% in O2/N2O 40/60%, 4 L/minute. CSEA was applied at the left lateral position, with a 27-gauge (G) spinal needle inserted through an 18-G Touhy epidural needle. Heavy bupivacaine 0.5% 12.5 mg and fentanyl 30 mcg were applied to the subarachnoid space after which an epidural catheter was inserted for postoperative analgesia. The patients who had CSEA were given O2 2 L/minute with a mask after the uterine incision just prior to the birth.

Immediately after birth, neonates were transferred to a radiant warmer. SpO2and rSO2 measurements were carried out between 1 minute and 2.5 minutes after birth. The Apgar (Appearance, Pulse, Grimace, Activity, Respiration) scores at 1 minute and 5 minutes were recorded. The age of the mother, the gestational week, the problems related to the pregnancy and comorbidities, heart rate (HR), systolic/diastolic blood pressure (SBP/DBP), and oxygen saturation (SpO2) of the mothers were recorded. The measurements recorded for the neonates were: the SpO2 of the right hand using a pulse oximeter (Nellcor N-55 Neonatal SpO2 Sensor; Covidien IIc, Mansfield, MA, USA), rSO2measured by NIRS (Foresight Dual Sensor Kit Small; Casmed, Bradford, CT, USA), the delivery time (from incision to the cessation of circulation in the placental cord), HR, and Apgar scores. The surgery times (from incision to the closure of skin) were also noted.

All infants born with congenital malformations, prematurity, intrauterine hypoxia or asphyxia, early membrane rupture, fetal distress, meconium aspiration, abraptio placenta, or placenta previa were excluded. Only infants with uncomplicated transitional periods were included in the analysis. The neonates born to the parturients who had CSEA and were given O2 prior to birth were excluded. In 13 infants, either SpO2 or rSO2 could not be accurately read due to motion, skin, or probe problems—these infants were also excluded from the analysis.

All newborns were dried and wrapped with warm towels. Immediately after arrival to the newborn resuscitation table, while the pediatrician performed initial newborn resuscitation, the anesthesia technician applied the NIRS transducer to the left and right forehead (rSO2) and transcutaneous pulse oximetry (SpO2) was measured at a preductal level (right hand). The transducers were covered with a towel and the hand and the forehead of the newborn were held still in order to minimize light and motion artifacts. The infant was positioned supine and was breathing room air. The pediatrician observed the transition of the newborn and recorded Apgar scores at 1 minute (T1) and 5 minutes (T5). 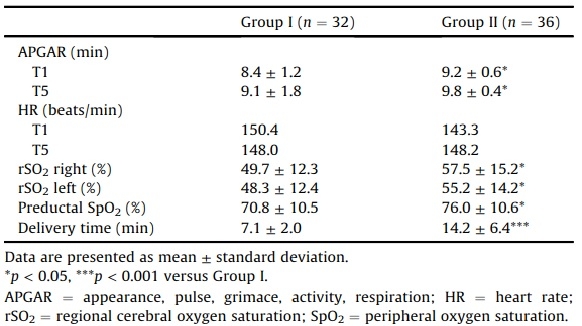 Both the SBP and DBP measured at 1 minute and 5 minutes after induction or start of the spinal block were significantly lower in the mothers who had undergone CSEA (Table 1; Fig. 1).

The HR of the mothers who were under CSEA was significantly higher than the GA group (Table 1; Fig. 1).

The Apgar scores at 1 minute and 5 minutes were observed to be significantly higher in Group II (Table 2).

Neonatal adaptation to extrauterine life is a dynamic process, and the management of anesthesia may have effects on the newborn during CS deliveries. In this study, we compare the effects of GA and CSEA on the regional cerebral oxygenation (rSO2) of the newborns by NIRS. The preductal SpO2 and simultaneous rSO2 values were found to be higher in the CSEA group than in the GA group in our study.

The term infants born by CS under GA were shown to have lower oxygen saturations and required longer to reach a stable oxygen saturation ≥85% in the immediate neonatal period compared with infants delivered vaginally.2Similar results were reported in the studies done by Kamlin et al1 and Dawson et al.3 In our study, the preductal SpO2 values were 70.8% in the GA group and 76.0% in the CSEA group, which is in accordance with previous studies. The measurements were done simultaneously with NIRS, during the first 2.5 minutes. The measurements were not continued up to 10 minutes because it would have interfered with the critical examination of the pediatrician. More studies could be done by measuring the preductal SpO2 and rSO2 for longer periods after birth.

In a review about NIRS in children at high risk of low perfusion, tissue oximetry was suggested as a noninvasive tool to continuously monitor and detect states of low body perfusion. It was stated that despite shortcomings in the ability of NIRS technology to accurately reflect validated and directly measured parameters of systemic oxygen delivery and blood flow, NIRS can certainly assist in the detection of low-flow states (low cardiac output), however, large, randomized, prospective studies with well-defined outcome parameters were suggested to be done in order to clearly define the role of NIRS in children at risk for low perfusion.10 In our study, the probes were applied on the forehead of the neonate as soon as the infant was transferred to the resuscitation table. The measurements were done as the neonate lay on the resuscitation table while being examined during the transition period by the pediatrician. The neonates with known congenital problems were excluded from the study so any low cardiac output states related to congenital anomalies were not included in our study. The artifacts from light and motion were prevented by holding the probes firmly with a cover. More studies related to the measurement of tissue oxygenation by NIRS should be done in order to increase the validity and accuracy of the method.

In a study comparing the changes of the regional tissue saturation of the brain during transition in a large group of healthy infants after vaginal delivery with CS delivery infants, the left rSO2 were not found to be significantly different between the groups and increased from 40% to 80% from 3 minutes to 10 minutes after birth in both groups. In our study, the right rSO2 in the GA group was 49.7% whereas it was 57.5% in the CSEA group, and the left rSO2was 48.3% in the GA group versus 55.2% in the CSEA group in the first 2.5 minutes after birth.

Higher catecholamine levels at birth were reported in vaginally delivered infants than in infants born by CS.11 In hemodynamically stable near-term sheep, dopamine infusion was associated with cerebral vasoconstriction, which is likely to be an autoregulatory, alpha-adrenergic response to the increase in BP.12 This may be an explanation for the lower rSO2 in neonates born by vaginal delivery. In our study, rSO2 values in the neonates born under GA were lower compared to the neonates born under CSEA. Further studies related to catecholamine levels and their relationships with rSO2 are warranted.

In the study of Urlesberger et al,9 there were significantly lower SpO2 and HR values in the CS group (mode of anesthesia had not been stated), and there were no significant differences in rSO2 between vaginal delivery and CS groups. These findings were similar to those of Isobe et al8 in which no significant difference in rSO2 was found within the first 10 minutes of life. Cerebral oxygen delivery is a product of blood flow and oxygen content. Because cardiac output in neonates is mainly determined by HR, a reduction in oxygen delivery with reduced HR (in the CS delivery group) is expected. In our study, the differences in the HRs of the newborns were not statistically significant either in the GA or CSEA groups (150.4/minute 151.8/minute, and 148.0/minute at 1 minute, 3 minutes, and 5 minutes vs. 143.3/minute, 150.3/minute, and 148.2/minute, respectively).

Myocardial function is crucial during hemodynamic transition to extrauterine life. Apart from left ventricular output and BP, CBF is regulated by cerebral autoregulation. Cerebral autoregulation is influenced by changes in blood gas (partial arterial oxygen pressure, PaO2; partial arterial carbon dioxide pressure, PaCO2). PaCO2 appears to have more influence on CBF than mean BP.13 There is a positive correlation between rSO2 and PaCO2 and a negative correlation between fractional tissue oxygen extraction and PaCO2.14 The study may be repeated by comparing the results with simultaneous blood gas analysis. More studies regarding the correlation between PaCO2 and rSO2 will be necessary in this regard.

The delivery times were significantly longer for the CSEA group than the GA group. Differences in delivery times were related to the comfort and “not being in a hurry” of the obstetricians treating GA patients, rather than due to any maternal conditions.

There were some limitations associated with our study. Only ASA I/II physical classification parturients and infants who did not require any supplemental oxygen were included in the study. The study may be repeated with patients who have comorbidities; the effects of all these factors should be adjusted by the unpaired t test or repeated ANOVA tests, and then the results may be more meaningful. The comparison of rSO2 with blood gas analysis may assist evaluation of the measurements.

In conclusion, our study shows that the rSO2 of neonates was higher in the CSEA group than in the GA group in the first 2.5 minutes. The preductal SpO2was also lower in the neonates born to mothers receiving GA.