Sixty obese patients undergoing gynecological laparoscopy were enrolled in this study. After tracheal intubation, the patients were randomly divided into the IRV group (n = 30) and control group (n = 30). They were ventilated with an actual tidal volume of 8 /kg, respiratory rate of 12 breaths/min, end-expiratory pressure and IE of 1:2 or 2:1. Arterial blood samples, hemodynamic parameters, and respiratory mechanics were recorded before and during . The concentrations of

Volume-controlled IRV not only reduces , Pplat, and the release of inflammatory cytokines, but also increases mean airway pressure, and improves oxygenation and dynamic compliance of in obese patients undergoing gynecologic laparoscopy without adverse respiratory and effects. It is superior to conventional ratio ventilation in terms of oxygenation, respiratory mechanics and inflammatory cytokine in obese patients undergoing gynecologic laparoscopy.

Laparoscopy is associated with peak airway pressure () and high end-tidal carbon dioxide tension (PETCO2) conventional ratio ventilation mode, especially in obese patients. gynecologic surgery usually requires steep or Trendelenburg position, demanding additional ventilatory adjustments to maintain oxygenation and .1, 2 It is difficult to improve the hypercapnia by increasing the respiratory rate or tidal volume, as the high airway pressure may not allow a further increase in tidal volume, and increasing respiratory rate sometimes fails to correct hypercapnia. Applying positive end-expiratory pressure (PEEP) might improve oxygenation and be accompanied an increase in . Furthermore, high tidal volume and high airway pressure may lead to lung barotrauma and volutrauma. It is reported that pressure-controlled inverse ratio ventilation (IRV) can successfully recruit collapsed alveoli and has improved oxygenation at lower .3, 4, 5, 6, 7 However, its use is sometimes limited by the significant elevation in with increasing the risk of 3, 4 a decrease in tidal volume. Prolonging time with inspiratory to expiratory (IE) ratio more than 3:1 might affect cardiac output, and the optimal IE of IRV is 2:1,8 we investigated whether volume-controlled IRV (IE = 2:1) was superior to conventional ratio ventilation in terms of oxygenation and respiratory mechanics in obese patients undergoing laparoscopic gynecologic surgery.

This study was approved by the Hospital Ethics Committee of Jinxing maternity and child health care hospital and registered in the protocol registration system (www.chictr.org.cn, registration numberChiCTR-IPC-15006522). Informed consent was signed by the patients. From May 2014 to June 2015 we chose a total of 60 obese patients of elective major gynecologic laparoscopy, ASA grade I or II, age 34–61 years, body mass index 30–35 kg/m2  71–87 kg), and expected duration of surgery > 1 hour. We excluded patients with cardiopulmonary disease and age > 65 years or < 18 years. The 60 patients were randomly divided into the IRV group (n = 30) and control group (n = 30), based on a computer-generated randomization list.

Anesthesia was maintained with propofol 4–6 mg/kg/h and 1.5–2.5% end-tidal sevoflurane to keep the bispectral index value between 45 and 55 (BIS monitor Model A2000; Aspect, USA) and control the response to the surgical procedure within a 20% range of the preoperative value. Muscle relaxation was monitored by the train-of-four (TOF) stimulation on the ulnar nerve (Type TOF-Watch SX; Organon, Oss, The Netherlands). of - (0.08–0.1 mg/kg/h) was performed to keep below 5%. Respiratory parameters were kept constant if PETCO2  <50 . PETCO2  50 , respiratory rate or tidal volume was adjusted to maintain PETCO2  50 . readings included Ppeak, plateau pressure (Pplat), mean airway pressure (Pmean), PEEP (auto-PEEP), and dynamic compliance of the respiratory system (CL) using a side-stream device (Anesthesia Monitor D-FPD15-00; GE, Taipei, Taiwan). CO2  tension was set at 15 . Throughout the study period, lactated Ringer's solution was infused at of 6–8 /kg/h.

The patients were put in a 30° Trendelenburg position after were placed and in the supine position again at the end of . Hemodynamic parameters were monitored at 5 minutes before anesthesia induction (T0), immediately before onset of (T1), 60 minutes after onset of (T2), and the end of surgery (T3). Arterial blood gas was analyzed using a blood gas analyzer (ABL8000A; Denmark) at T1 and T2. Postoperative complications were observed, such as in the postanesthesia care unit (PACU), hypoxemia [defined as of oxygen (PaO2) < 80 ], and other pulmonary complications. The patients could be discharged from PACU when modified Aldrete score was 9 or above.

Before and during , we collected respectively right bronchoalveolar lavage fluid soaked in 20  normal saline for 5 minutes with a fiber (Olympus, Tokyo, Japan), and 20–30% of this fluid was recovered. The samples were centrifuged (3000 r/min,  = 16 cm) for 15 minutes at 4°C and the stored at 70°C. Tumor necrosis factor (TNF-α, interleukin (IL-6, and IL-8 levels were detected enzyme-linked immunosorbent assays (Boshide Biotechnology, China), using a microplate reader (Hyperion MRIII, USA) according to the manufacturer's instruction.

All data were analyzed with SPSS 19.0 statistical software (SPSS Inc, Chicago, IL, USA). Descriptive statics and compliance with normal distribution was examined with one-sample Kolmogorov–Smirnov test. Between the two groups, two-tailed Student t test and Mann–Whitney U test . Categorical variables were evaluated the Chi-square test. All quantitative data were expressed as mean ± standard deviation. A value of p < 0.05 was considered statistically significant.

The sample sizes of this study were determined based on the following considerations. The main variable was 2  this study, which had a standard deviation of 38.6 from the pilot study done in 10 patients. A priori power analysis using two-sided analysis with α error of 0.05 and a power of 1.1 showed that 54 patients were needed for this study.

Table 1. Data of patients in the two groups immediately before onset of pneumoperitoneum (baseline).

Download full-size image
Table 2. Data of patients in both groups at 60 minutes after onset of pneumoperitoneum.

BioZ.com noninvasive hemodynamic monitoring reflected the changes in the two groups. In the condition of anesthesia and , mean arterial blood pressure fell, and gradually increased after the end of . Intragroup comparison indicated that the blood pressure, heart rate, cardiac output, stroke volume index, and systemic vascular resistance were higher at T2 than T1, (p < 0.05), but of hemodynamic parameters between the two groups found no statistical significance (p > 0.05; Figure 1). The levels of TNF-α, IL-6, and IL-8 were increased significantly 60 minutes after onset of in both groups. At T2, the concentrations of TNF-α, IL-6, and IL-8 were lower in the IRV group than in the control group (p < 0.05; Table 2). No postoperative hypoxemia was observed and there was no statistical significance in incidence of hypercapnia and PACU discharge time between the two groups (p > 0.05; Table 2). There were no cases of respiratory complications during the hospital stays of all patients. 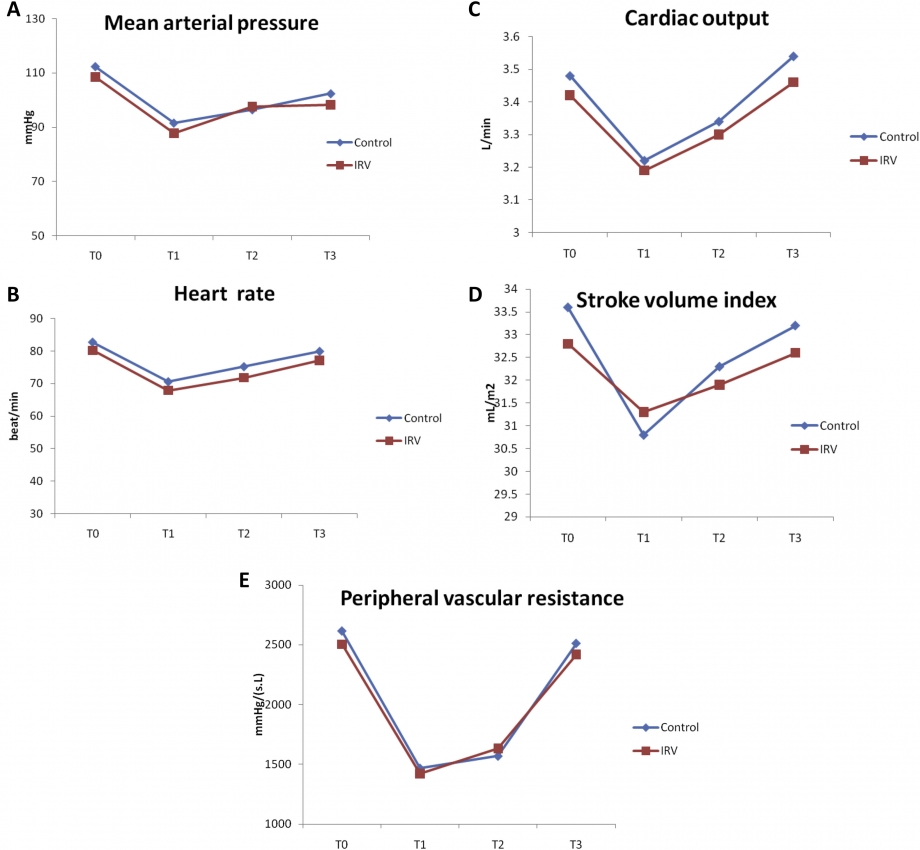 Obese patients are susceptible to high due to the reduction of CL and functional residual capacity.9 increased and CL decreased during in the obese patients undergoing gynecologic laparoscopy. On the one hand, CO2  elevated the abdominal pressure, pushed the diaphragm into the thorax, raised pressure and compressed lung, which would result in the reduction in CL and diminution of lung volumes. On the other hand, due to the weight of , the steep Trendelenburg position has great effect on shift of the diaphragm, lung volumes, and pulmonary functional residual capacity10, 11; the steep Trendelenburg position and CO2 elevated the Ppeak and reduced functional residual capacity in patients undergoing gynecologic surgeries.

The lower peak airway pressure in the IRV group was possibly due to and prolonging time of IRV. Higher mean airway pressure might be achieved by prolongation of IE ratio. A previous study proved that IRV could improve oxygenation and reduce Ppeak and compared to volume-controlled ventilation in gynecologic laparoscopy.12

It is well known that IRV can improve arterial oxygenation in acute respiratory distress syndrome, and elevates , recruits atelectatic alveoli, reduces intrapulmonary shunt, improves ventilation and decreases dead space ventilation. Prolongation of the time allows enough time gas exchange. Meanwhile, as the expiratory time is short, IRV might lead to trapped air in the lungs with of intrinsic PEEP or auto-PEEP. Mechanical ventilation also generated auto-PEEP in conventional ratio because of and high airway pressure in . In addition, PEEP could improve oxygenation for elevating Pmean. Hence IRV would contribute to improving oxygenation. IRV may lead to intrinsic PEEP5 it is thought to improve oxygenation and have advantageous effects on pulmonary mechanics.13

In the IRV group, although 2  slightly higher than the control group, there was no significantly different between two groups. Prolonged time of IRV increased the mean distribution time to facilitate inspired gas for distribution and diffusive mixing within the lungs and thereby enhance CO2 . It is a reasonable explanation that the time did not affect of CO2, probably due to the CO2  into blood.14 A previous study demonstrated that a prolonged time increased the mean distribution time in the lung and improved CO2 .15 This study also shows that IRV has no effect on of CO2.

In this study, CO2  and steep Trendelenburg position might lead to an increase in SVR in , and reduce venous return and cardiac output because of the compression of inferior vena cava, but there were no significant differences in hemodynamic parameters between groups in this study. IRV with E of 2:1 might reduce cardiac output with minimal effect on mean arterial pressure, and this meant that IRV did not hamper venous return with possible consequent derangement. This was consistent with the previous statement that increasing the percentage of time had no demonstrable changes in during mechanical ventilation.16, 17 IRV might reduce cardiac output only IE ratio beyond 2:1.18

In this experiment, the levels of TNF-α, IL-6, and IL -8 were significantly lower in the IRV group than in the control group at 60 minutes after CO2 . Not only mechanical ventilation, but also operation wound and CO2  might provoke the release of inflammatory factors. Acute lung injury involves a series of inflammatory response in the lungs, with accumulation of both pro- and anti-inflammatory cytokines in bronchoalveolar lavage fluid.19 Inflammatory factors play an important role in the stress response. TNF-α and IL-6 are important inflammatory factors. TNF-α is mainly secreted by activated macrophages, and is a proinflammatory cytokine and the initial factor in the inflammatory response; other inflammatory cytokines can be induced to produce TNF-α. IL-6 is one of the most important inflammatory mediators—the damage degree of lung is positively correlated with its concentration.20 Not only are large tidal volume and high the main factors of ventilator-induced lung injury,21  obesity is also risk for lung injury, which is associated with increased inflammation cytokines, indicated by the increases of TNF-α and IL-6, through activation of toll-like receptor and nuclear factor light chain-κB signaling pathways.22 Conventional ratio ventilation mode caused higher cytokine levels compared with IRV. Therefore IRV can alleviate .

In general, lung-protective ventilation strategies consist of small tidal volume with optimal PEEP and limited Pplat during mechanical ventilation. It is well known that ventilation at a low tidal volume can result in , but IRV can reduce and intrapulmonary shunt fraction because of higher mean airway pressure. High peak airway pressure is thought to contribute to and lung injury through the generation of elevated alveolar shear forces.

The limitations of our study are: (1) auto-PEEP was not measured accurately because of instrumentation; (2) second, parameters are noninvasive; and (3) further studies are needed to determine the optimal ventilatory mode that could reduce Ppeak or and maintain without adverse respiratory and effects.

In conclusion, IRV not only reduces , Pplat, and the release of inflammatory cytokine, but also increases Pmean, and improves oxygenation and CL in obese patients undergoing gynecologic laparoscopy without adverse respiratory and effects. It is superior to conventional ratio ventilation in terms of oxygenation and respiratory mechanics and inflammation response in obese patients undergoing gynecological laparoscopy.

We are indebted to Dr Zhu Sheng for providing for manuscript preparation.