Ischemia–reperfusion (IR) features massive oxidative stress of tissues and cytokine response. and , both of which are commonly used anesthetics, are thought to have different antioxidant activities. The aim of this study is to delineate the influence of these two drugs on the production of free radicals and proinflammatory cytokines in IR conditions via in  in vivo models.

An in vitro IR model was performed by incubating porcine cells (including mononuclear cells, and coronary and aortic smooth muscle cells) with either 25 μM or 2% in the hypoxia chamber (1% O2, 37°C) for 1 hour, followed by room temperature air for 2 hours. Reactive oxygen species (ROS) and tumor necrosis factor-α (TNF-α) were also measured via flow cytometry and enzyme-linked immunosorbent assay methods,

The results showed significant reduction of both ROS and TNF-α levels in the propofol group in vitro IR model. However, there was no difference in lipid peroxidation and TNF-α level between propofol and sevoflurane for the in vivoIR model.

Ischemia–reperfusion (IR) produces a lot of free radicals and causes tissue damage.1 In clinical practice, there are lots of conditions associated with IR, such as tourniquet-induced IR in peripheral or major vascular surgery or organ transplantation. When IR occurs, reactive oxygen species (ROS) and inflammatory cytokines such as tumor necrosis factor-α (TNF-α) may cause severe problems owing to associated tissue damage. It has been said that vascular smooth muscle cells are the possible target.2Meanwhile, modern anesthesia uses rapid recovery anesthetic drugs to reduce the effect. and are two of the commonly used drugs. However, it has been reported that has a more antioxidant effect and reduces free radical-induced injury3, 4 Propofol was also reported for its proinflammatory cytokine response suppression in sepsis4, 5 However, there are little data available that indicate the difference of these two drugs in an IR model. This study investigated the antioxidant and anti-inflammatory effects of propofol and sevoflurane via in vitro and in vivo IR models with porcine cells and animal methods. As we know, porcine cells are even closer to human cells than rodents. The results should provide better clinical implications.

Peripheral porcine blood polymorphonuclear (PMN) cells were purified with Ficoll-Paque density gradient centrifugation. Whole blood (50 ) was diluted with an equal volume of Hank's Balanced Salt Solution (HBSS) with 5% bovine serum albumin and then carefully layered over Ficoll-Paque. After was performed (40 minutes, 400g), the PMN layer was carefully aspirated, washed in HBSS three times, and incubated in 60 mm plastic culture dishes in HBSS with 5% bovine serum albumin. The nonadherent cells were aspirated and the adherent cells (PMN) were for 3 days for stability before experimentation. Porcine aorta smooth muscle cells (PAOSMC, Cell Application Inc., San Diego, CA, USA) and coronary smooth muscle cells (PCASMC, Cell Application Inc.) were all cultured in 37°C 5% CO2/95% air, and maintained with specific growth medium (P311-500) without fetal bovine serum added. Cells were stored in liquid nitrogen if not used. Medium was changed every other day until the culture was > 60% confluent and the subculture was 80% confluent.

Cells were coincubated with either 25 μM or 2% condition and then incubated in a hypoxia culture chamber (1% O2, 37°C) for 1 hour and (21% O2, 37°C) for 2 hours. Cells were then collected and ROS and proinflammatory cytokines were measured. Cell damage evaluation after hypoxia was evaluated by 2-(4---3-(4--5-(2,4--2H- (WST-1) method.6 WST-1, a water-soluble formazan enzyme, is thought to reflect a sensitive respiratory enzyme activity after injury. Cells (5 × 103/well) were in (96 wells, flat bottom) with 100 μL medium and 10 μL WST-1 (Roche Molecular Biochemicals, Indianapolis, IN, USA) was added and then incubated for 4 hours. Optical density was measured at 450  on a microplate reader.

Cellular accumulation of was determined the method. To measure ROS levels, treated cells were incubated with 1M of for 30 minutes at 37°C, followed by cell washing and in ice-cold phosphate-buffered saline. Cell Quest software was applied for flow cytometric analysis (FACS Calibur, BD Biosciences, San Jose, CA, USA). The mean fluorescence intensity of white cell, separated with electronic gating in the forward scatter/side scatter dot plot, was measured and quantified in arbitrary units of 10,000 events.

Animals were maintained with (10–15 mg/kg/h) or (1.5–2.5%) according blood pressure change. Serial blood serum sampling (10  for each time point) including basal level, 30 minutes, and 60 minutes after aortic clamp and 60 minutes and 120 minutes after aortic were also harvested when for special designed ventricular assist device implantation was performed in the descending thoracic aorta. During aorta clamping or , vessel control drug (nitroglycerin and epinephrine) plus fluid infusion were administered to maintain blood pressure within ±25% of the basal level. The total clamp time (clamp over descending thoracic aorta) was 1 hour and blood pressure was also recorded. Serum, centrifuged from whole blood (14,000 , 4°C, 15 minutes), was then stored at −80°C for analysis.

The antioxidant effect of on lipid peroxidation was evaluated by determining malondialdehyde (MDA) level in the blood via the thiobarbituric acid reacting substances method.7 Serum mixed with trichloracetic acid and thiobarbituric acid was boiled. was then added to the tube and results were obtained at 532  after .

The level of proinflammatory cytokines (TNF-α) in serum and culture medium were analyzed with a commercial enzyme-linked immunosorbent assay kit (R&D Systems, UK) and obtained with an enzyme-linked immunosorbent assay reader at 570 . Briefly, after , and stored at −80°C. Cytokine levels were determined by interpolation with standard curves assayed on individual plates and normalized to protein content in each sample.

The results are expressed as means ± standard error mean. One-way analysis of variance and or multiple comparisons were used for the statistical evaluation of differences among means. A value of p < 0.05 was considered to be statistically significant. 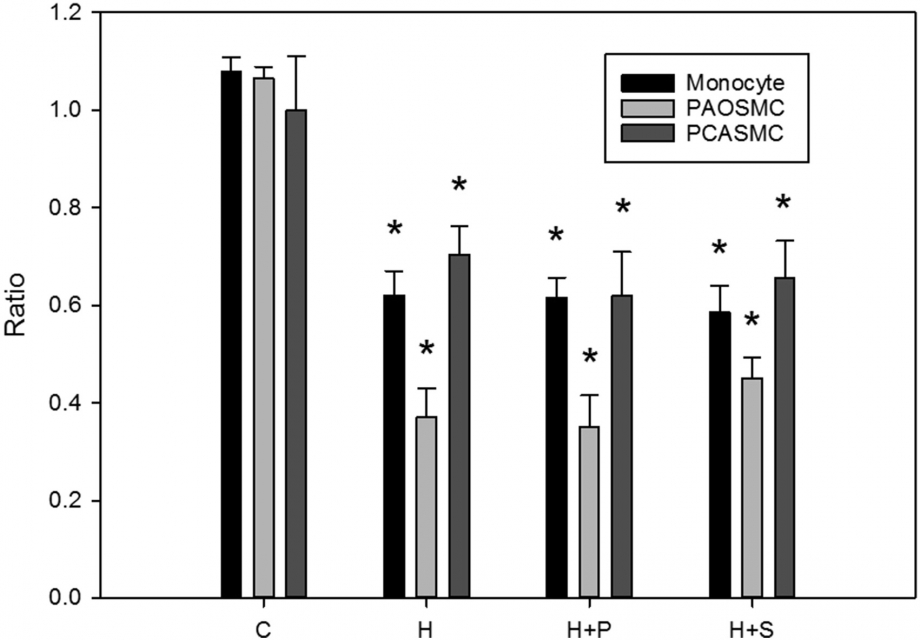 Download full-size image
Figure 1. This figure shows an in vitro ischemia–reperfusion injury with the 2-(4-iodo-phenyl)-3-(4-nitrophenyl)-5-(2,4-disulfophenyl)- 2H-tetrazolium method. It shows that the in vitro ischemia–reperfusion model induced cell damage whether anesthetics were used or not. There was no difference in various cells or even a slight increase in the sevoflurane group without statistical significance (n = 4 in each group, * shows t < 0.05 compared with control). C = control; H = hypoxia group; H + P = hypoxia plus propofol group; H + S = hypoxia plus sevoflurane group; PAOMSC = porcine aorta smooth muscle cells; PCAMSC = porcine coronary smooth muscle cells. 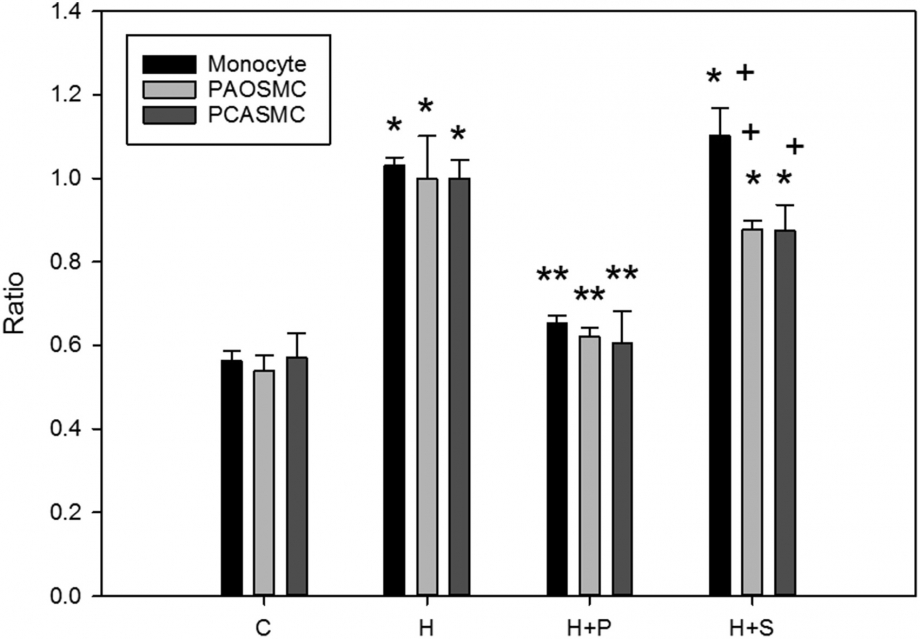 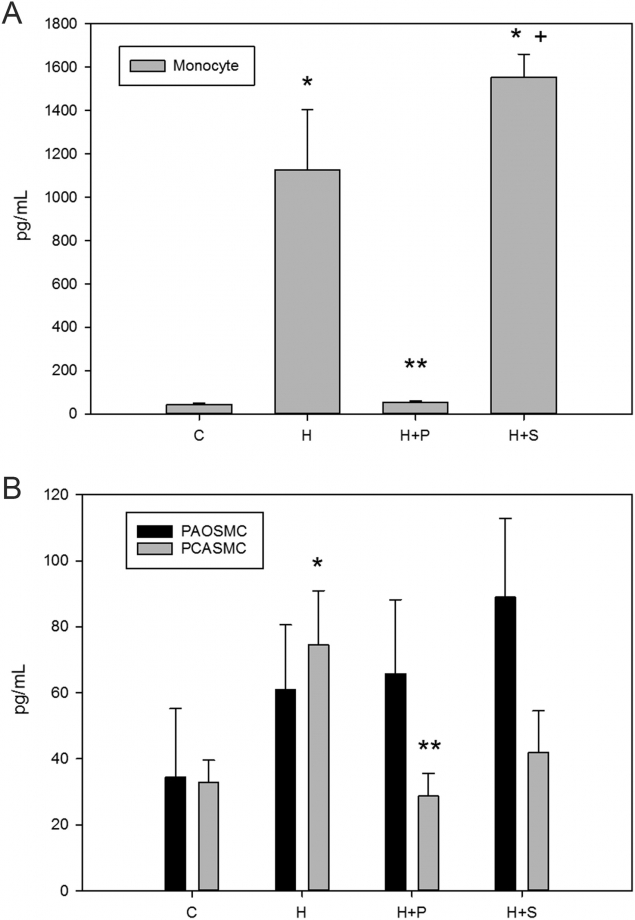 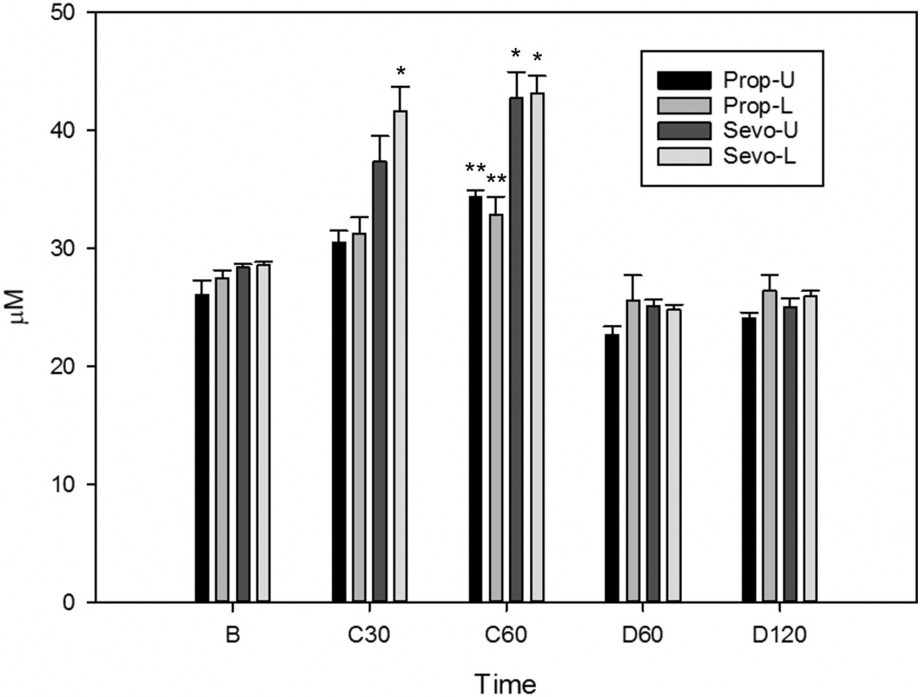 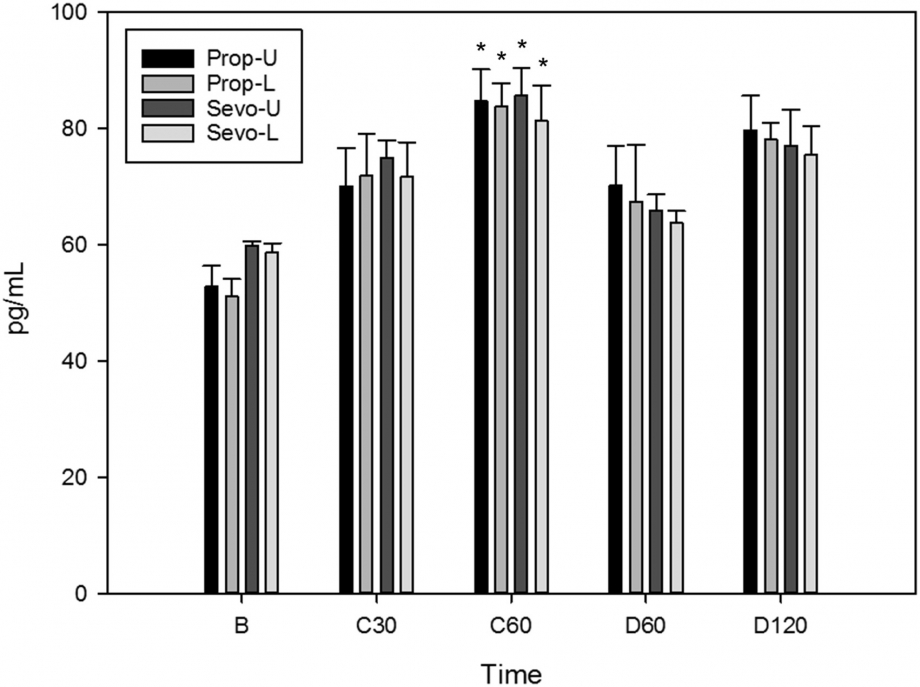 Both propofol and sevoflurane are commonly used anesthetics due to their fast recovery profile, and they are in many different clinical and basic . Some researches demonstrated that rather than preserved myocardial function in coronary surgery8, 9 It has also been said that attenuates the hemodynamic response in injury more than .10 However, in other studies, was associated with less of an increase in the level of MDA on tourniquet knee surgery11  provided lower blood concentration of and TNF-α (tissue damage markers) in a piglet IR model.12 It was also indicated that cannot reduce the level of postoperative I in cardiac surgery.13 Compared with , caused no difference in intestine tissue examination after IR injury.10 However, has been reported to reduce circulating more than in brain ischemia rats14  reduce interstitial metabolites in tourniquet-induced IR surgery.15 Moreover, Jakobsen et al16  that had a benefit for severe preoperative ischemic stress and less incidence of postoperative atrial fibrillation in their 10,535 cardiac surgical procedures.

and both provided some beneficial effects on the heart. However, there are no data of these two drugs on vascular smooth muscle cells or for in vitro IR models. For , reduced interleukin-2 production while with .17 In our study, had better effects on ROS suppression on and smooth muscle cells via an in vitro IR injury model. Also, had a significant suppression on the production of TNF-α in and coronary smooth cells but not in aortic smooth muscle cells. et al18 the difference of antioxidant capacity of in different organs. But little data indicated the difference in different cells. There were also no on the mechanism of those differences. Further detailed studies may be needed to solve this issue.

ROS induced by pathological conditions could produce vascular injury via interacting with or vascular smooth muscle cells.19 ROS-associated oxidative damage was also thought to be a mediator of vascular injury , or diabetes.20 ROS and TNF-α were also involved in the -induced vascular inflammation in vascular smooth muscle cells.21 It is important to evaluate the influence of different anesthetics in an IR condition on the production of ROS and TNF-α. However, it also needs more surveys to demonstrate the beneficial effects of anesthetics on vascular inflammation.

We failed to demonstrate the difference of MDA or TNF-α production in a whole porcine IR model. We thought that the variable ischemia time and the sampling point may cause this inconsistent result. et al22  that there was no difference of those two drugs in the severity of lung injury with a 90-minute porcine IR model. et al23  that 45-minute thoracoabdominal aortic occlusion can induce mild pancreatic injury. et al24  presented the intestinal injury in their 60-minute IR porcine model. Except the different IR injury induced by different ischemic times, none of the results in the above studies demonstrated the serum level of ROS or TNF-α in their IR model. Another possible explanation for our negative result is the difference may be demonstrated only in a regional not in a whole body serum level. The negative result the in vivo model may be also for the inappropriate sampling timing. The surge of ROS and proinflammatory cytokines might be just after the aortic declamping moment, but we sampled the serum 1 hour later after aortic declamping. The critical sampling point might be missed. This point of view is supported by Aldemr et al's25  which indicated that reduced ROS injury markers in blood only in the initial 5-minute period in their tourniquet-induced IR model.

The authors would like to thank Alice Y.W. Chang and Julie Y.H. for their helpful and important commentary and assistance for this work. The authors also want to give thanks to -Chi Huang and Pao-Yen Lin for their help in the cell culture and animal study, respectively. This work was also partially supported by research grants from the National Cheng Kung University Hospital (NCKUH95-86), Tainan, Taiwan.