Ebstein's anomaly is an uncommon congenital heart defect with an extremely variable natural history due to a wide spectrum of pathological features. We report on the anesthetic management of a 24-year-old primigravida woman with Ebstein's anomaly with recurrent supraventricular tachycardia for emergency cesarean section.

In 1866, German physician Wilhelm Ebstein first described the clinical and anatomical features of a tricuspid valve anomaly in a 19-year-old Polish worker.1 The incidence of Ebstein's anomaly is < 1% of all congenital heart defects.2 The malformation stems from the failure of the septal and posterior leaflet of the tricuspid valve to delaminate from the right ventricular (RV) musculature inlet. It is characterized by downward displacement of the tricuspid valve such that the RV has a distal effective portion and a proximal atrialized portion.3 Problems associated with Ebstein's anomaly are atrial septal defect, patent foramen ovale, arrhythmias, etc.4 Arrhythmias are the most common causes of sudden death in these patients.5

A 24-year-old primigravida woman at 36 weeks of gestation was admitted to the obstetric unit with labor pains. She was diagnosed with Ebstein's anomaly at 16 years of age. She had recurrent supraventricular tachycardia (SVT), about three to four times per year, throughout adolescence, which necessitated hospital admissions. She did not comply well with the antiarrhythmic treatment. She had suffered two episodes of SVT in the 3rd month and 5thmonth of pregnancy, which were managed by intravenous administration of adenosine. Otherwise, her clinical history was unremarkable.

Physical examination revealed a heart rate of 84 bpm and a blood pressure of 134/86 mmHg. Her weight was 60 kg and height was 140 cm. Airway was Mallampati Grade III and the thyromental distance was 6 cm. On auscultation, she had a systolic murmur in the tricuspid area with loud S2. Otherwise, her systemic examination result was unremarkable. Because she was in obstructed labor, she was taken for emergency cesarean section. Her hemoglobin level was 9 g/dL and blood group was O positive. An electrocardiography showed sinus tachycardia and an echocardiogram revealed displaced tricuspid valve, intact interatrial septum, moderate tricuspid regurgitation, and pulmonary arterial hypertension with ejection fraction of 60% (Fig. 1). 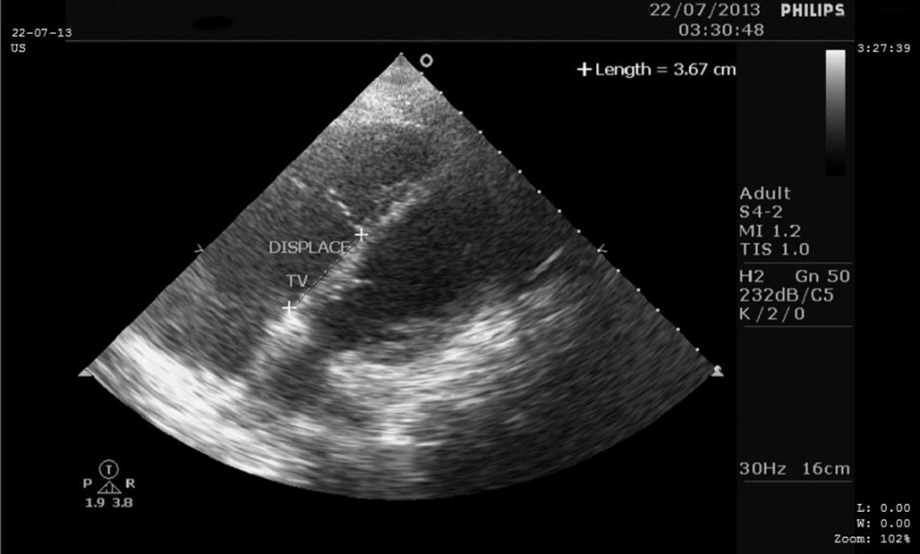 She was premedicated with ranitidine (50 mg), metoclopramide (10 mg), ampicillin (2 g), and gentamicin (80 mg) intravenously. In the operating room with all the standard monitors connected, an epidural catheter was inserted through the L2–3 space with an 18-G Tuohy needle by loss-of-resistance-to-normal-saline technique. A test dose of 3 mL of 2% lignocaine with adrenaline (15 μg) was injected in between contractions and the position of the catheter was confirmed. Subsequently, 8 mL of 0.5% bupivacaine was administered in graded doses to achieve adequate level of block. Soon after delivering a live baby, she had a brief episode of hypotension with SVT that subsided after a 50-μg bolus of phenylephrine. Ten units of oxytocin was slowly infused. The intraoperative blood loss was approximately 600 mL. Postoperatively, she received epidural analgesia with 0.0625% bupivacaine and fentanyl. Written informed consent was obtained from the patient for publication of this case report.

Patients with Ebstein's anomaly may be asymptomatic or severely disabled.6Pregnancy is well tolerated in cases with Ebstein's anomaly except when there is severe cardiomegaly, cyanosis, or arrhythmias.7 There may be deterioration in the RV function due to increased blood volume and cardiac output during pregnancy and also in the postpartum period.8 Increased catecholamine levels in pregnancy may predispose to and exacerbate symptoms of paroxysmal SVT.9 Our patient suffered from recurrent arrhythmias that continued into the antenatal period.

A previous study had reported on the successful use of epidural anesthesia for cesarean section in a patient with Ebstein's anomaly with intact interatrial septum and good ventricular function.10 Hypotension can be avoided by careful positioning to reduce venous pooling and using graded doses of a local anesthetic. These patients exhibit prolonged induction time during general anesthesia, which will increase the risk of aspiration.11 Considering these factors, we decided to administer epidural anesthesia to our patient. Our patient had a short stature and an anticipated difficult airway. However, we could pass the epidural catheter without much difficulty, and thus avoided the risks of a difficult airway. Nevertheless, general anesthesia could have resulted in arrhythmias during induction, if we had stimulated the airways excessively. Oh et al12 have reported a 20% incidence of SVT during general anesthesia induction in Ebstein's anomaly.

Invasive cardiac monitoring using central venous catheter or pulmonary artery catheter may be technically difficult in patients with Ebstein's anomaly and may lead to complications such as tachyarrhythmias, paradoxical embolic stroke, and bacterial endocarditis.6 Therefore, these were not used in our case. Judicious fluid administration is necessary to avoid precipitating RV dysfunction and arrhythmias. Phenylephrine is indicated for hypotension. It may reflexively decrease heart rate and reduce or terminate SVT.13

Some drugs used during labor may precipitate SVT.9 Tachycardia is poorly tolerated because RV is small, dysfunctional, and has diastolic abnormalities. Therefore, prompt management of SVT is necessary. Intraoperative SVT can be managed using beta-blockers such as esmolol.14 Adenosine can be an alternative option.15 Calcium-channel blockers are avoided because of their negative inotropic effect and peripheral vasodilator effect. Direct current cardioversion is necessary for resistant SVT and can be administered along with fetal monitoring.9

As in our case, postoperative epidural analgesia may help in preventing tachycardia and exacerbation of arrhythmias and RV dysfunction. Drugs with the least cardiotoxic effect such as ropivacaine or levobupivacaine may be preferred over bupivacaine and lignocaine with adrenaline, when available.

Ebstein's anomaly is a rare congenital heart defect with a varied spectrum of presentation. The choice of anesthetic is individualized and remains a challenge to the anesthesiologist. Proper clinical and echocardiographic assessment and adhering to the basic principles in managing a cardiac case can help in making the perfect decision. Epidural anesthesia may be a safe choice in these cases especially with arrhythmias.