Tracheostomy is a known surgical technique for airway management, especially in patients with head, facial, and cervical spine injury. A 26-year-old man, who had been in a road-side accident and had head and facial injuries, reported in the accident and emergency department of our institute. He was tracheostomizedwith a 7.5-mm internal diameter (ID) tracheostomy tube (TT). The patient was shifted to the operation theatre for repair of avulsed facial tissue. The patient was healthy and had a very short and bulky neck. Because of this, the TT was getting repeatedly dislodged. We planned to replace the TT with an endotracheal tube (ETT) through the tracheostomy stoma. In literature, various techniques have been documented for tube exchange. The airway-exchange catheter has been used by various authors and may be of benefit when a TT must be changed before maturation of the tracheal cutaneous tract.1 Jahromi2 suggested the use of a guidewire “j” tip catheter instead of a central venous catheter, for the exchange of a TT. Different authors have suggested the use of various instruments such as a suction catheter, urethral catheter, fiberoptic bronchoscopy, stylet,3 ETT exchange,4 and gum-elastic bougie.5

We took a 4-mm ID ETT which was further engaged in a 16-french gauze-suction catheter and tied with a silk suture. The suture was tied tightly by passing the stitch using a needle through the engaged assembly, assuring that the strength was appropriate. To the other end of the suction catheter a standard connector of a 4-mm ID tube was attached (Figure 1). This attachment was done to increase the length of the exchange gadget. The length of this assembly was 67.5 cm, which was more than sufficient to serve as a tube exchanger. The assembly was inserted through the TT. The TT was withdrawn and the patient was ventilated through the assembly. Thereafter, a 7.5-mm ID ETT was railroaded over the assembly and was subsequently sutured and kept in situ for ventilation. Although this kind of equipment may be helpful in crisis management, they are also associated with some life threatening problems like barotrauma, lung hyperinflation, tension pneumothorax, pneumomediastinum, subcutaneous emphysema, and failure to successfully thread the ETT.4, 6 Benumof4 stated in his article that air entry with jet ventilation through an airway-exchange catheter should be limited by presenting the jet ventilator at 25 psi by using an additional in-line regulator and by limiting inspiratory time to less than 1 second to prevent the above complications. Introduction of an airway-exchange catheter can also result in perforation of the tracheobronchial tree if inserted with force or advanced too deeply.4, 7 Suction catheter bears the advantage of being soft in nature, thus minimizing the problem of perforation and injury to the tracheobronchial tree. But it has the disadvantage of easy kinking, which can be life threatening and care should be taken to avoid such problems. Such technique is successful in crisis management when there is lack of equipment like an airway-exchange catheter, bougie, fibreoptic, etc. 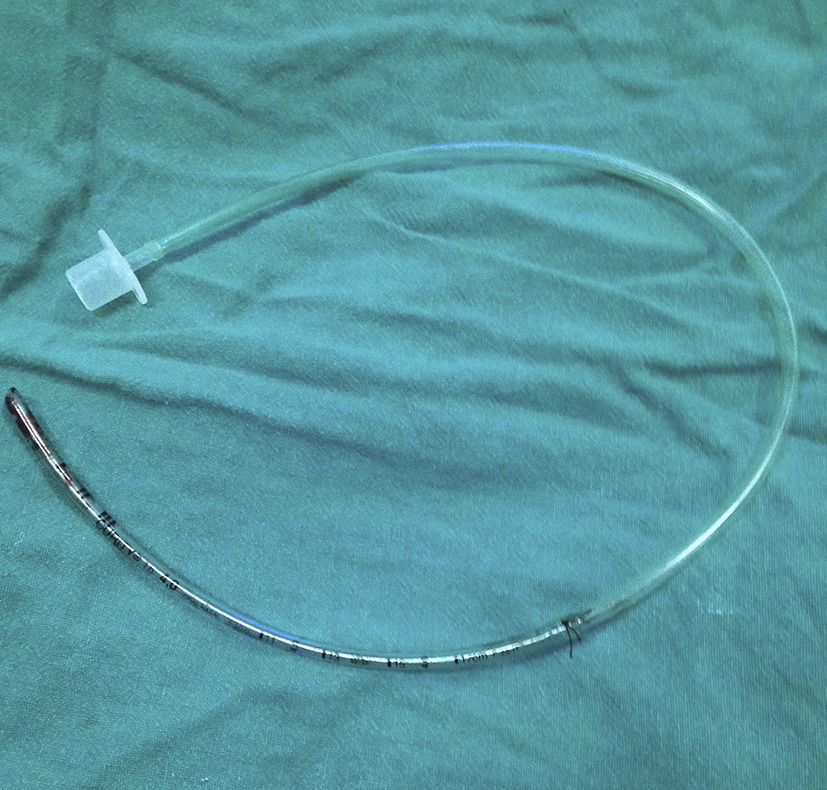